I didn’t know Sarah Watt and I don’t know her husband, William McInnes. But for a few reasons I feel a bit connected to them. 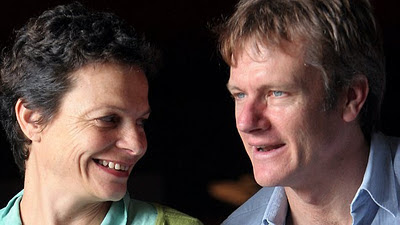 At different times when I have been looking for inspiration or solace I have found it in their TV characters, films and books. Back in 2000 when I was writing a story about my love of swimming and water, I was struggling to find an angle.  I found it watching William as Max Connors in the ABC-TV series, Seachange.  Gazing over Pearl Bay, magistrate Laura Gibson (Sigrid Thornton) asks Max what he believes in.

“Swimming,”’ he says. “I believe in swimming. Wherever I am – when things are good or bad – that’s what gives my life meaning.”
I had been struggling to articulate my feelings about swimming and there was William on the small screen saying it for me. He gave me my angle and opening lines to my story.  Five years later when my father was going through chemotherapy treatment for secondary bone cancer I went to see Sarah’s film, Look Both Ways. I had taken the day off work and went to the movies to try and relax and escape the dread and worry. When I sat in the Palace Theatre that afternoon, I felt like Sarah's movie starring husband William and Justine Clarke was made for me; was talking to me.  It was a sad but uplifting movie about cancer and death and grief. It was also funny at times and filled with hope. I emerged from the darkness of the theatre feeling comforted and more relaxed.
A few years ago when I started writing about swimming pools I came across an article by William about the Footscray Swimming Club at Maribyrnong Aquatic Centre. I enjoyed the piece and related to his sentiments about the community spirit of a local swimming club and the characters who make it worth turning up each Sunday morning.

More recently, on one of my post-working-at-home-all-day-walks to Norton Street, Leichhardt, I discovered Sarah and William’s new book, Worse Things Happen at Sea: tales of life, love, family and the everyday beauty in between published by Hachette Australia. I had heard that Sarah wasn’t well with secondary bone cancer after reading an article and listening to an interview with William on ABC Radio National’s Life Matters. 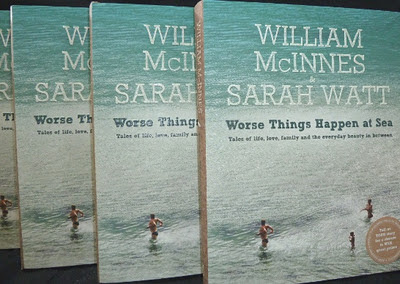 I flipped through their book and had to buy it – it was so beautifully designed –  full of touching and funny stories from both of them. It also featured Sarah’s photos – a number of water and pools.  And then last night I read a chapter towards the end of the book from Sarah entitled Cloudy Days, where she describes her love of water. 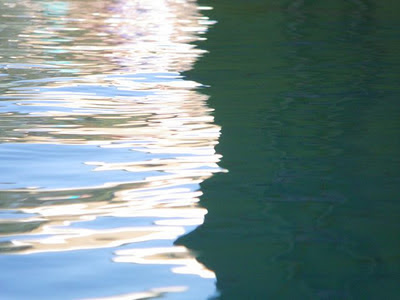 “I can’t be sure when or where my love of the water – watching it, being in it, painting it – began,” she writes. “But I can’t imagine it ever being unimportant to me. I love its cycle, moving from rivers and oceans, to clouds then rain, tides linking to the phases of the moon and the moon to the stars. If I can’t figure out what everything else in the world is about, I can always be calmed by the simultaneous predictability and unpredictability of water and the weather. Walking along a beach is the most soothing thing I can do.”

She also vividly recounts her love of swimming and the local pool.  So as a tribute to Sarah who died last Friday aged 53 and a thank you from me for your creative inspiration, here are a few more of her watery words (from page 210-211): 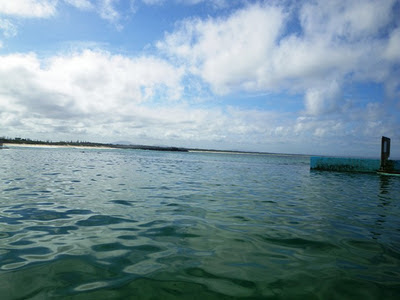 “...I lived for the pool opening day each spring and the worst punishment my mother could hold over me would be the denial of my season ticket to the pool. In the water I felt as fast and smooth as a seal or a penguin.  I loved it, loved so many things about it. Being weightless, unwatched. I felt graceful as I dived beneath its surface and curved like a dolphin through the deep, before pushing off and leaping out of the water briefly to dive back under to the quiet.

"I also loved swimming competitions – no talking, no one to witness my fierce competitiveness or giggly laughter, depending on the day. Swimming fast, swimming faster. No ‘Who’s got the ball?’, ‘Pass it to me, to me!’ or team selection, where I would stand unpicked and, in my mind, unloved. Instead, it would just be me up on the blocks, looking ahead, diving and swimming as fast as I could. Nothing but the black line, aqua water and the patterns and shadows of my movements on the pool floor."
Posted by Therese at 5:58 PM 3 comments: 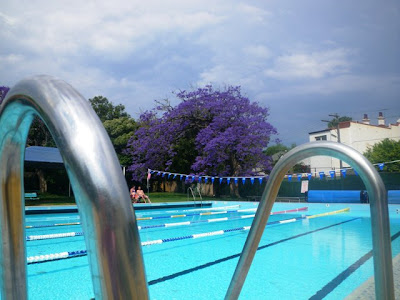 It was lovely swimming at Petersham's Fanny Durack Aquatic Centre this morning with the jacaranda tree in full bloom.
Posted by Therese at 6:28 PM 2 comments:

The politics of protesting at the public pool

Pools are not just places of pleasure; many times they have been the scene of protests and demonstrations.  As the editors of  Modern Times, The untold story of modernism in Australia state: “As a relatively new kind of social gathering place the pool emerged in the first half of the twentieth century as a unique arena that amplified political and social attitudes." 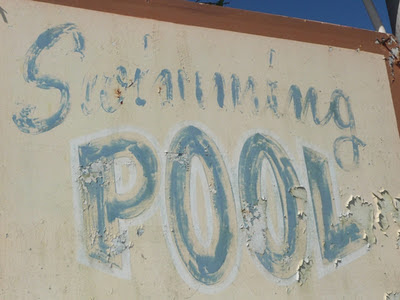 The public pool was also the place where race relations were played out particularly during the 1950s and early 60s when some Australian country towns barred Aboriginals from using the local pool. One of the most famous protests was in 1965 when Charlie Perkins and his fellow Freedom Riders picketed the Moree Artesian Baths in north-west NSW. 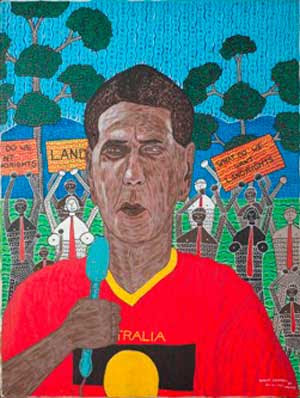 Inspired by the US Freedom Rides, the group of 33 university students travelled to Moree and other NSW country towns to draw attention to the discrimination and inequalities Aboriginal people faced.  In particular the Freedom Riders highlighted the banning of Aborigines from local amenities such as clubs, pubs, picture theatres and pools.

In the 1993 Rachel Perkins-film about her father and the Freedom Ride, Moree-local Lyall Munro jnr remembers how the black children could only go in the pool during school swimming sessions.

“We were all lined up and scrubbed and washed and checked for lice before we could go in the pool,” says Lyall. “And then we were only allowed in a corner section and when school finished at 3pm we had to get out.”

To draw attention to this inequality the Freedom Riders arrived at Moree Pool on 17 February with a group of Aboriginal children.  Ann Curthoys, author of Freedom Ride: A Freedom Rider Remembers says they were admitted in order to avoid a confrontation. "We later left town, believing that council management had agreed to desegregate the pool,” she says.

When they got word the council hadn't followed through with rescinding the ban, they headed back to Moree. On the way they picked up some Aboriginal kids from the mission. Lyall Munro jnr was one of those kids. He remembers the experience as one of the most exciting days of his life. Even at the age of 10 he says he had a sense that he was taking part in something historic.

“On the way we sang songs of the time, like Little Patti’s ‘Stomping at Maroubra’,” he says.

With the support of local Bob Brown, who had been agitating to over-turn the ban for some time, this time the Freedom Riders were successful. Ann Curthoys remembers an increasingly tense atmosphere with the council agreeing to abolish the regulation if the students promised to leave town immediately.

Sydney University recently held an exhibition on art and activism connected to the Freedom Ride.  One of the artworks featured in the exhibition was Robert Campbell jnr’s 1986 painting ‘Barred from the Baths’.  Robert Campbell states: 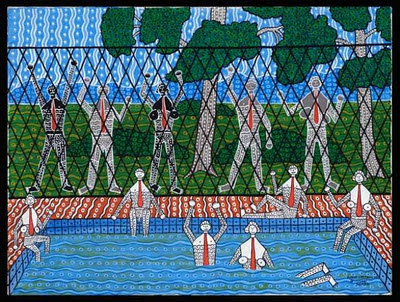 “I am painting to show people – Aboriginal people, and even the whites – what truths took place in my lifetime: for example, being fenced off at the pictures; the dog tag system. I am telling stories, the struggle of Aboriginal people, tribal and others, through my life.”

When we visited the Moree Artesian Complex in 2009 we met a number of Aboriginal people enjoying the mineral-rich healing waters.  Deanna Boney and Lesley Barrow soak in the centre's hot  spas or swim in the 50-metre pool most afternoons. “The water’s good for pains, good for everything, and it helps you sleep well at night,” they say. 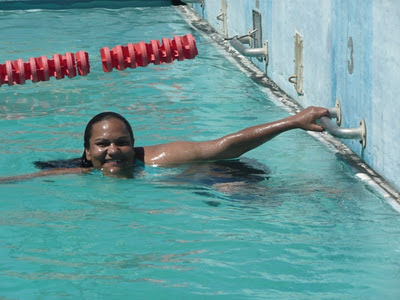 Musician Gene Knox also usually visits each day. “I love the water; it’s so relaxing,” he says, as he chats to local identity Ron O’Mullane, known as the bard of the baths for his poems about his much-loved pool. 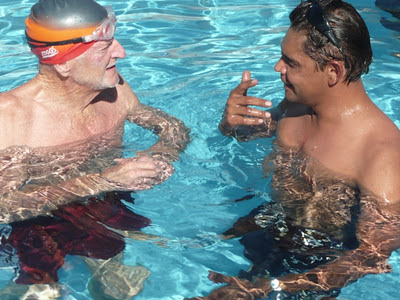 We can thank Charlie Perkins and his fellow Freedom Riders that times have changed.
Posted by Therese at 5:29 PM 4 comments: