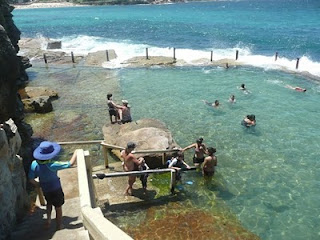 It only costs 20 cents to get into McIver's Baths, a lovely sea pool nestled in a protected curve of the coast at Coogee. There's no turnstiles or reception desk at this peaceful place so making a contribution relies on honesty and trust.

Reserved for women and children only, no men are allowed at this pool. This custom goes back to the early nineteenth century when the pool was thought to have been a traditional bathing place for Aboriginal women. From the late 1820s white women also bathed there, and since the 1860s it has remained a women-only bathing area. A few times in its history, organisations and individuals have applied to have the baths open to men but each time they were unsuccessful. A key objector to Randwick Council's 1946 proposal was the Mother Superior of the Brigidine Convent at Randwick. She said the nuns at her convent, any country nuns vacationing there and the 100 boarders at the Brigidine school would not be able to visit the baths if they were opened for mixed bathing.


The baths are named after Robert and Rose McIver, who began operating them in 1918 and developed them into the form they are today. With Mina Wylie, Bella O'Keefe and others, Rose McIver established the Randwick and Coogee Ladies Amateur Swimming Club in 1923. In the 1970s and 80s renovation work was completed, and in 1994 the pool was heritage-listed by the National Trust. 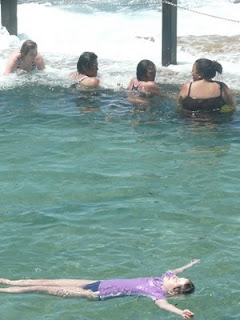 Today the pool attracts all types of women but is particularly popular with Muslim women, Pacific Islanders, older women, mothers with babies and young children and lesbians. The day we popped in for a dip the ladies at McIver's were lounging on the steep, grassy slope above the pool, reading, relaxing and enjoying the sun. Others stood in the water and chatted. One goggled and capped woman swam laps up and down the 20-metre sea pool, dodging the less energetic bathers floating and relaxing in the crystal clear water. A group of Samoan women hung on to the pool wall and enjoyed the wash of the waves gushing over their bodies like they were in a spa. My nieces jumped in and swam about, declaring later that McIver's was a very nice, peaceful pool, protected from the wind and big waves. They would come back again even though at nine and 11-years-of-age they weren't so sure about the naked bosoms of some of the patrons, but maybe the spirits of the Aboriginal women who first discovered this bathing beauty would lure them back.
Posted by Therese at 5:17 PM